You are here: Home1 / THE ADVENTURE BEGINS

This page will be used to record details of our travels. First trip will be for a few days as a shakedown cruise to make sure everything is working as it should do. I will do this by myself as I do not, in any way known to man, wish to have a female voice going “you have spent all this time and money and there is a problem ?”

Currently I am doing some tests with the trailer on the hook with the Suzy aboard, this makes us nearly 19 mtrs long so that is a whole new experience, got to really use all the available road on corners and really monitor those mirrors.

Once this is out of the way (it is to be absolutely sure that there are no overheating issues in all terrains) I intend to push off to visit some other busnuts, follow this page to follow my exploits.

First small trip is done and dusted, a quick jaunt to visit another busnut at Bundaberg. VP ran really well, got around 3 klicks to the litre with the trailer on so was quite happy about that, expected less.

Found a few issues as expected, that was after all the purpose of the trip, and they are being attended to over the Xmas break, prior to a trip to NSW in the New Year. I am going to fit a bigger secondary radiator, while everything is fine now, I can see that those long drags on a hot day across the nullabor may be too much, so this will be done purely as a safety precaution for those times.

Also found the knife valve below the domestic toilet will only work when the auxiliary air tank is full, not at half pressure so an actuator will be fitted to it as well.

Small things, expected, and will be taken care of easily. Very enjoyable short trip all the same, given me a taste for more.

Xmas has really put the kybosh on rectifying a couple of the things I wish to. I have decided to get a custom radiator made as the supplementary to get as much capacity as possible, but of course all the companies that can do this have taken a break until the 12 th. So just have to be patient. We also have discovered a front brake issue with unexpected and uneven wear on the tips of the front brake shoes, for which we need some expert help, again have to wait until all these people come back to work on the 12 th. Damn !

Well a few things have happened since the above posts. Before Sydney trip I took VP to CPF to check out a few things. The front brakes were dragging and getting hot. What was found was the front slack adjusters were worn in such a way that they applied the brakes but did not fully “unapply” the brakes when you took your foot off the pedal. This allowed the bottom shoes to slightly drag all the time. They also found a leaking rear oil seal on the drive and the other side was badly adjusted. So, after repairs, I went from trying to stop the thing with just the tag brakes, to being able to stop on a dime. Great feeling.

Took off the Sydney for the business meeting with Woolies, took the car and trailer as the kids flew down for the day. Found at one stage I was doing 115 ! VP was just running sooo well after the earlier tune up and no brakes dragging it was a pleasure to drive.

Spent a few days at our suppliers house in South West Sydney and got the meeting out of the way, VP was parked on his helipad !

Left down there to come back at about 8 oclock in the morning, right in peak hour traffic, not a lot of fun on Pennant Hills road. VP was singing along until we got to around Grafton when it started pissing down, no worries wipers on, but an ominous knock started soon from the passenger side wiper. It eventually gave up the ghost and just lent against the centre post where the drivers side once bounced off it occasionally. Very heavy rain, even the b dubs were slowing down and just north of Maclean the windscreens started to fog up. Tried to wipe with a T shirt, just made it worse. Persisted with it until the top of St Helena hill, pulled over and did a proper clean on the inside with soap and glass cleaner, it occurred to me then that I had never cleaned them after they were fitted, fine in daytime, not while raining. Anyone reading this that does not know St Helena hill, it is just west of Byron Bay, and bloody steep, full of road works.

At the same time as it stared raining the speedo went crazy, when it stopped it sorted itself out. A new speedo generator was fitted at the first visit to CPF and the company around the corner that did it must have left the wires exposed, when wet they were all over the place, fortunately my GPS had a speed reading as well.

Anyway, cleaned the screen, waited for a break in the b dubs and pulled out, reached out to switch the wiper on and it didn’t work ! So, the rest of the way down this bloody big hill with speed camera at the bottom with no wipers, pissing down rain and traffic everywhere to make it even harder to see anything. Pulled half off the road into an emergency stopping bay at the bottom to see if I could fix anything, tightened the passenger side up, jumped back in and switched on, the passenger side one was still stopped but the drivers side worked ! On with the winscreen blowers at full speed, let’s go. Out of there and look out, I am headed for home. VP was flying, something about the Detroits liking cool damp air, so just sat on 100 and kept at it, whoops gunna need some fuel to make it home.

Rain stopped so pulled off the motorway to the service centre at Coomera, never been there before. Just as I did so the rain returned, so heavy most cars just stopped driving, so of course I missed the service centre, no worries I will stop at Nudgee. Didn’t see the 200 high traffic island where the lights were either ! Unintentionally put the trailer wheels over it, thank god or whoever you believe in, for independent air suspension and the 8 chains holding the Suzy down.

Pulled into Nudgee and put in 100 ltrs as I wanted to get home, came back out after paying to find the front air bags were down. Could not work this out, started up and let build pressure and drove out, just before getting back onto the gateway arterial we hit a bump and I knew there was no air in the bags. Halfway onto the freeway, what are you going to do, trailer on, people behind, can’t back up, bugger this lets drive home, be there in 20 mins. Needless to say, was a bumy ride home, but I made it 14 hours after leaving Sydney’s southernmost parts (near Camden)

Investigation revealed that one of those dash switches that didn’t do anything was a switch for a “kneel” function, it must have been switched over enough when I switched the blowers off, just to have made a circuit.

There endeth the trip from hell, I learnt even more about VP and can’t wait to get away again. Stay tuned. 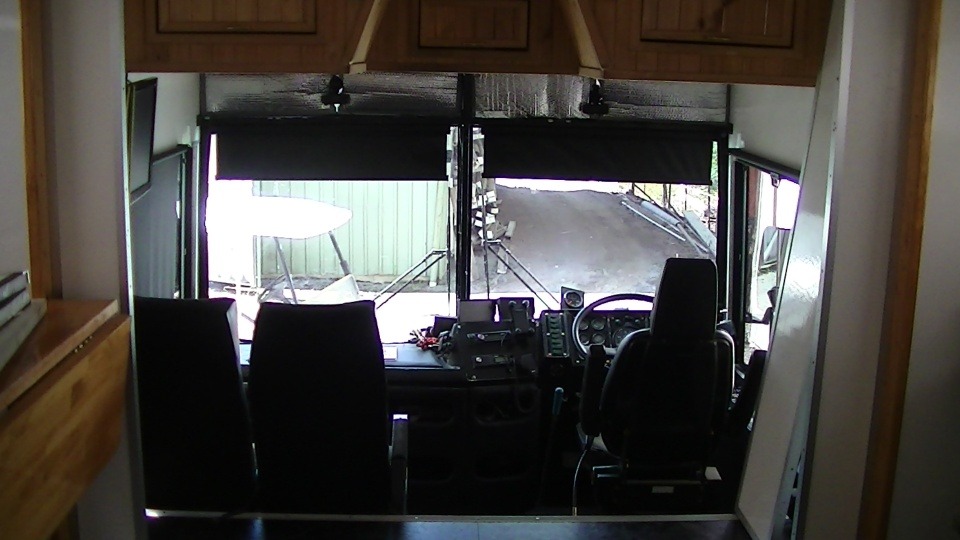 One thing these 2 trips have highlighted is the sun that can hit you through the large flat Tourmaster windscreens. Fortunately we have cut down the size of our screens so have a level bar to hang scissor blinds from. Works perfectly. At the end of each slideout you can see a small white section, this has been added as part of our closing off of the driving cabin, while traveling, the larger piece leaning on the right hand wall fits in between those 2 when closed up and there are a couple that go over the top, just slot into place. In this way the air con has only to keep the driving area cool whie traveling, instead of 1/2 the bus. 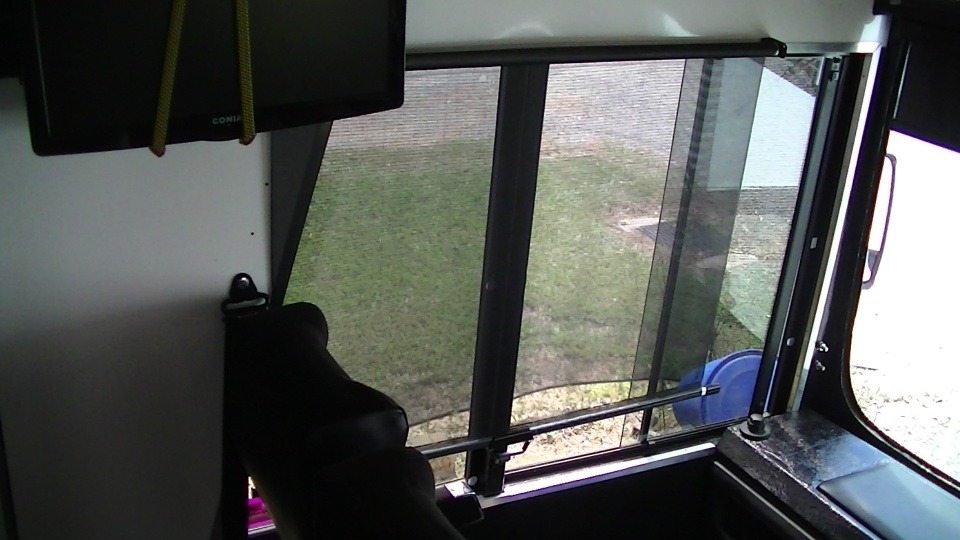 Here is one of the side screens, the front ones are solid, but these are blockout screens, you can see through them for mirrors etc, but they do a fantastic job of blocking the sun coming in the side. The ragged line at the bottom is not the screen, it is the unsecured shadecloth on VP’s building. the blinds are well made, purchased from Fry’s Spares, they have the agency for one of the big American makers.